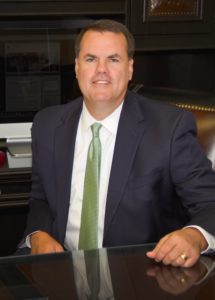 Collinsville native Marc Parker has been named to the Illinois Basketball Coaches Association Hall of Fame in recognition of his 35 plus years as a basketball official.

He will go into the IBCA Hall of Fame May 2, 2020 at Redbird Arena on the campus of Illinois State University in Normal.

“It’s not something I ever really thought about as a referee. Just to be nominated is a great honor and to think that some folks thought that what I’ve done over the last 35 years is worthy enough to be inducted into the hall of fame means a lot to me,” Parker said.

Parker, a 1983 graduate of Collinsville High, has a long lineage in sports.

His father, Jack Parker, was a longtime baseball and basketball coach at Granite City High while his uncles, Harry and Tom Parker are instantly recognized symbols of the storied Collinsville Kahoks basketball program.

During Marc’s three seasons as a starter for the Kahoks, they won a Regional title and an SWC crown. He was part of the 1,500th win in Kahok history, a 59-57 overtime win at Alton in 1983.

He moved on to play basketball and tennis for a time at SIUE. However his officiating career began a few years prior to that.

“I grew up in a gym and my dad thought I could make some money without having to get a real job. He also wanted me to have a better understanding of how hard it is to be a referee. I was doing little kids’ games, probably 4th grade, 5th grade when I was a sophomore,” said Parker.

For a time, he gave up officiating to coach at Collinsville under Bob Bone in the early 1990’s. He left coaching but did not want to leave the game entirely.

“Being a referee was a way I could stay in the game and contribute. I kept doing it to to give back…high school basketball and sports in general, are very important to me. They taught me the value of hard work and how to compete. I played here in Collinsville and some of the best times of my life were playing high school sports,” he said.

Parker worked his way up the ladder of officiating through the years. He has refereed many tournament title games in both the regular and postseason. In 2018, he was part of the crew that called the epic Class 4A state title game between Belleville West and Chicago Whitney Young.

Despite the toll on his knees from 35 years of calling games, he still has a passion for it.

“I’ve always liked refereeing basketball because when you get on that floor and you’ve got a game going on you don’t have time to think about anything else,” Parker said.

In addition to his IBCA recognition, he was named the 2018-19 IHSA boys basketball Official of the Year.

“You don’t receive any award or make it into any hall of fame by yourself. There were a lot of people who helped me along the way,” he said

Above everyone else, Parker wanted to thank his family.

“First and foremost I want to thank my wife and kids for their support over the years,” he said.

He was appreciative of athletic directors/assigners like Bechtold, Bone, Frank Pitol and John Wehmeier.

He currently belongs to the Southwest Athletic Officials Association (SAOA) and thanked the supervisors he works with including Gary Gustafson, Bill Schmidt, John Sallee and Dave Figueira.

What they say about Parker:

-“Marc is one of the top officials in the state of Illinois. I know when he is working a game, that game is in good hands. He is extremely professional and there is a reason that you see him working many of the top games in our area,” said Greenville athletic director Joe Alstat.