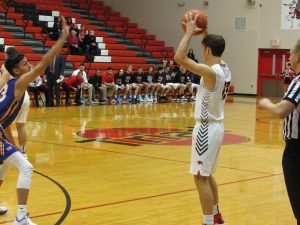 The Triad boys basketball team travelled to Freeburg for a game last Tuesday. The Midgets entered the game with a 21-8 record. Triad boasted a 20-7 record prior to the game.

The game got off to a slow start offensively, thanks to solid defense by both teams. At the end of the first quarter, Freeburg has taken a 9-5 lead. In the second quarter, both offenses exploded and the Midgets took a 31-20 lead into the half-time break.

The Knights came out of the break with intensity and trimmed Freeburg’s lead down to 33-26. The hosting Midgets responded however by going on a 9-0 run later in the period to expand their out to 44-28. At the end of the third quarter, Freeburg held a strong 48-33 lead.

In the final quarter, the visiting Knights fought back to be down 55-46. The score never drew closer however and Freeburg left with a 62-51 victory. Senior Luke Cox led Triad on the scoreboard with a tally of 25 total points for the game.

21 was Triad’s lucky number for their February 21 matchup against the Civic Memorial Eagles. Triad’s scoring leaders for the night, Michael Tentis and Luke Cox, both tallied 21 for the game. The victory also was number 21 for Triad on the season.

The contest was the third of the season between the Knights and the Eagles. Triad won both of those games by scores of 52-46 and 71-43. The hosting Eagles enter the third game versus the Knights with a 9-19 record overall and 0-9 in the MVC.

The first quarter was slow offensively and tight but Triad left it with a 12-10 advantage. Triad had another slow quarter in the second but expanded their lead up to 22-17.

In the third period, the Knights nearly doubled their first half score as they ended with a total of 42 points. The hosting Eagles fell further behind as their total was only raised to 29.

The visiting team’s offense exploded yet again in the final quarter and their defense still remained stout. This gave them a win by a final score of 61-39. It also bumped them up to 21-8 on the season.

Tentis’s aforementioned 21 points paired with 12 rebounds on the night earned him a double-double. Cox’s 21 points drew him within 40 points of second place on Triad’s all-time single season scoring record, with two regular season games still remaining. He is only 10 points away from taking sole possession of third place on that list.