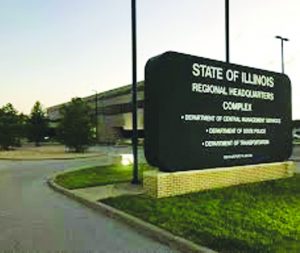 The requested to the State Police website gives specific details about what the ISP is looking for in the property. “The ISP seeks to purchase vacant land or redevelopment land comprised of one or more adjacent, adjoining, or neighboring parcels and located within the St. Clair County, Illinois from one or more property owners to be used for the construction of a multi-story, approximately 62,500 square foot combined police facility, and a single story approximately 21,000 square foot warehouse facility for the proposed construction of an Illinois State Police (ISP) Metro-East Combined Police Facility. It is expected that the each building will have a minimum building footprint of approximately 200’ x 105’ and will require a setback for a barrier plan around the facility as required by the appropriate municipality zoning. The parcel(s) should be a minimum of 4 acres with the appropriate dimensions to accommodate the aforementioned footprints. Additionally, the property should be suitable to accommodate an above and/or an underground parking structure(s) or surface lot(s) having approximately 135 secured parking spaces. On-site, secured, surface parking is preferred.”

According to Beth Hundsdorfer, the Chief Public Information officer for the Illinois State Police, the Illinois State Police decided to relocate as part of a goal to realign “organizational resources and assets throughout the state to meet the changing demands of growing public safety missions. That realignment is data-driven and focused on bringing ISP criminal patrol and criminal investigations to where those efforts are most needed and most beneficial”.

In response to the question “How do you think this will impact the Collinsville community with the new cannabis dispensary next door?”, Hundsdorfer stated ‘it has no impact on our statewide realignment efforts and have had no calls to the location since it opened in 2016 selling medical marijuana”.

Planning for the move began with passage of a $55 million Capital Development bill last year for a “much-needed, new combined facility for Patrol District 11, Investigative Zone 6 and Southern Illinois SWAT capabilities.” The current facility is shared with the Illinois Department of Transportation and no longer adequately meets the growing public safety requirements of the region in which the ISP is engaged.

The District 11 headquarters has been located in Collinsville since 1987. City of Collinsville Assistant Manager Derek Jackson and Mayor John Miller stated that “its too early to comment on this issue since we have not received anything formal from the state or ISP regarding potentially moving.”