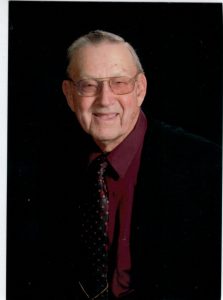 He was born on Saturday, August 07, 1920, in Marine, the son of  George and Katherine (nee Knebel) Voegele.

Born and raised at Marine.He worked for Wilbur Messmer driving a truck spreading lime.  In, January 18, 1945, he was hit by the 1:00 o’clock train in Marine.  He worked for Curtis Right , St. Louis.  Later drafted into the US Army, with duty overseas at Osaka Japan from 4/30/1946 to 5/10/1947.  He then worked for Williams Chevrolet garage, Highland.  In 1950 he rented Emsley Keown farm, north of Marine, 160 acres, milking and farming.  In 1964 he rented the Daisy Bird farm and with both farms gave up milking.  In 1972 he purchased a 160 acre farm, where he lived the rest of his life, Later renting another 80 acres.  Edwardsville Motor Service, helped him with the purchase of a tractor, plow, combine, baler and cultivator, all with a hand shake.  In 2019 he gave up the rent ground and farmed only his own.  He was diagnosed with Non-Hodgkins Lymphoma, he took chemo and was very lucky to have fought it off.  He was a hard worker, loved his family and dancing with Ruth and their friends.  With their good friends and neighbors they took a cruise on the Royal Caribbean “The Song of America” in 1983.

Private Services will be held at Spengel-Boulanger Funeral Home in Highland, IL.

Private Interment will be at Saint Joseph Catholic Cemetery in Highland, IL.

Memorial contributions may be made as Masses or Donor’s Choice.