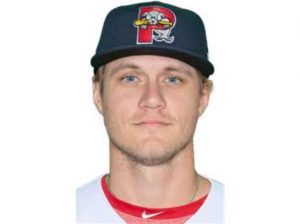 On March 12th, the Major League Baseball season was put on hold due to the COVID-19 virus. On that day, six spring training games were played in Florida. Tanner Houck and his Boston Red Sox teammates did not have a game, but were in Ft. Myers preparing for their day in spring training.

“They sat us down before everything was going on,” Houck said last week from his new residence in Atlanta, Georgia. “They said everything was normal and we went about our day as if nothing happened. There was definitely concern from other people who were down in Florida that were maybe living with their grandparents, those who are married and maybe have some kids. So people definitely had a concern.

“I’m a little bit more laid back in the sense that I was like, ‘just give me a baseball, I’ll go play catch and I’ll go out there and pitch.’ Then we got a message later that day saying we need you all to come clean out your lockers and don’t come back to the field.”

On March 23rd, the Fenway South training complex run by the Red Sox organization was shut down, but Houck was already back in Collinsville.

The Sox had given their players workouts to conduct during the shutdown but even those guidelines have been a challenge to execute.

“That’s honestly probably been the hardest thing. Every gym that you can work out at is typically closed. The Red Sox gave us a program to do at home, a bodyweight workout. Then on throwing I’ve been having a high school buddy catch me with some flat grounds here and there but mostly just trying to play catch. Then just running through neighborhoods honestly is the other strategy, you gotta go back to what you did in high school before I knew about all this specific training,” said Houck.

“Thank God for him because he saved me a little bit from throwing into a fence every single day. I know he hated it because there were times where I would ramp it up a little bit,” he said.

According to SoxProspects.com Houck’s fastball tops out at 98 mph while he works at 93-96 mph.

“Luckily I wasn’t ripping that at him but still for a guy that hasn’t caught a baseball in a few years now, anything above I think 70 is going to look a little bit hard for him,” said Houck.

He has been assigned to begin the 2020 season back with Pawtucket where part of his journey took him last year.

For the Red Sox he was with teams in Portland, Pawtucket and Peoria, Arizona. Then, for good measure, the 2017 1st round draft pick of the Red Sox represented the United States in the WBSC Premier 12 Olympic qualifying tournaments in Mexico and Japan.

He began the year at Fenway South in Ft. Myers for spring training.

After that he was assigned to the Portland Seadogs of the Class AA Eastern League.

“I had a great time there. Portland, Maine, if you ever get a chance in the summer-time to go is absolutely beautiful. The baseball there was just even more icing on the cake,” Houck said.

Houck spent most of his time in Portland as a starter. However, just before the all-star break, the Red Sox organization moved him to the bullpen.

He threw at the Class AA All-Star game in Richmond, Virginia then made one relief appearance before being called up to Class AAA Pawtucket, Rhode Island.

“At Portland, I had a decent season. Obviously I had some ups and downs but I definitely found myself a little bit there,” Houck said.

For the PawSox, he appeared 16 times, throwing 25 innings and accumulating a 3.24 ERA. He struck out 27 hitters.

“The entire time I was there I was a reliever. I threw pretty well. I really enjoyed the bullpen life. Getting to pitch every three days instead of five days was definitely a fun adjustment. I enjoyed it a lot,” said Houck.

After the regular minor league season was over, Houck was assigned to the Arizona Fall League. The AFL is an elite league for the best prospects in baseball. Throwing for the Peoria Javelinas, he went 3-2 with a 3.47 ERA. He appeared in six games and threw 23 ⅓ innings. He struck out 25 in AFL play.

“I went to the fall league as a starter again which was a little bit of a weird thing to go back to. I was used to throwing in a game every three days for one inning. But you realize, ‘I’ve got to get rebuilt back up as a starter getting to throw five innings instead of one.’ After that I had a pretty good fall league. I really feel like I established myself as a starter and was really developing into who I feel like I’m going to be,” he said.

The U.S. played in both Guadalajara, Mexico and Tokyo, Japan. Houck pitched in both countries for the American squad. While the USA did not qualify for the 2020 Tokyo Olympics, Houck spoke highly of his opportunities.

“Putting USA across your chest..I remember getting to do it after my freshman year in college still and just think, ‘holy cow I’m representing the USA right now,’” began Houck. “It was a little bit different playing for the collegiate team. You wanted to win to show everyone we’re the USA and baseball’s the game everyone wants to play, everyone loves baseball in the U.S.

“This time it was a little bit different, we’re playing to qualify for the Olympics. You could just tell that this one meant even more. But thinking about it now I could go to the Olympics if we would’ve qualified. It’s just mind-blowing to me. It’s a true honor to represent this country.”

The U.S. team had another chance to qualify, but the Baseball Americas Qualifier in Arizona that was scheduled for late March was cancelled due to COVID-19 as were this summer’s Tokyo Olympic Games.

While the Olympics have been postponed for a year, Major League Baseball has floated a couple of different possibilities for salvaging their season.

“Right now we’ve got to wait, I believe, for the partial openings so they are going to see how that goes and how the spread of this terrible disease goes. Then they’ll figure it out after that,” Houck said.

Back in Illinois, schools and seasons have been cancelled including his alma mater, Collinsville High.

Despite his status with the baseball world he remains humble and still keeps in close contact with his former Kahok teammates.

His greatest memory was signing his National Letter of Intent to play for Missouri.

“The day that I signed to Mizzou was a true honor for me. I signed it in Collinsville High School with just some friends and family around,” he said.

Additionally he still talks with the Collinsville coaches both present and past as well.

One of his biggest projects is also in the Metro East. In 2018 he began his Pitch for Adoption program which was born out of the experience of many in his immediate family.

“My Dad was adopted, my stepdad was adopted and I have a sister who was adopted,” Houck stated. “I mainly started it for my sister. We got her whenever I was in high school. We got her whenever she was four years old as a foster kid. Actually the first thing that she had to come to when she first came to our house, was a baseball game. I was a freshman in high school, she had to come watch me pitch the JV baseball game at O’Fallon.

“Then that same summer, I was pitching for the St. Louis Prospects, the travel ball team I was on at the time, she traveled with us across the country to every corner. It was me and her in the backseat driving six, seven hours together. She was thrown into the baseball life. Obviously we have that brother/sister mentality so we argue a little bit but I love her!” Houck said.

The charity benefits the children of the St. John Bosco Center in Belleville. Houck donates $25 for each strikeout to the residential center.

“I want it to continue to grow as big as it can possibly get. It’s something we started and I’ve kept it local which I think is the most important, because I want to give back to the community that helped raise me,” said Houck.

He indicated he will continue the charity but also welcomed the support of fans as well. Individuals can donate a flat rate or donate a certain amount per strikeout.

“Every single dollar we raised goes to the kids at St. John Bosco,” he said.

In addition to those donations, Houck has other fundraisers for his cause.

“We ran two camps this past offseason. Every single dollar we raised there went to them. This coming offseason we’re trying to get two more camps set up and possibly a golf tournament,” said Houck.

There are various platforms on which fans can reach out and become involved with his program. You can find the Pitch for Adoption website on pledgeit.org/tanner-houck. The twitter page is @Pitch4Adoption. The charity is also on instagram at pitchforadoption.

“We’re just trying to grow it as much as possible because at the end of the day they’re kids that have been put in tough situations. I want to give back to them and show them they have a role model to look up to and someone who cares about them,” he said.