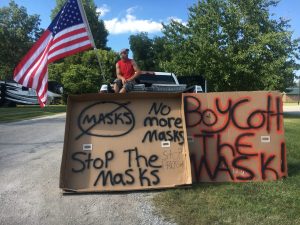 Andrew, a Marine resident, staged a protest on Friday afternoon on Vernon at Division St. across from the Stop-N-Go Mart in Marine, after  “the gas station gave him attitude” for not wearing a mask as posted on the doors. He said he asked the operators to show him the Governor’s executive order and they were unable to do so. He also said that they have lost his business until the mandate changes and he has heard other customers make the same comment. Andrew said passers by were supportive, honking and stopping to talk to him. Although alone this time, Andrew said if the signs are not down in a couple of days he will have another protest with more people. “The more people buy into it the worse it’s going to get”, Andrew said. He also believes children should be in school and not forced to wear masks “since they are least likely to get sick”.