Herbert Edward Wilson, 90, of Troy, IL born December 20, 1930 in Jonesboro, IL passed away peacefully at his home on April 1, 2021 surrounded by his loving family. 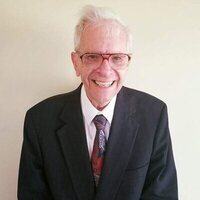 Herbert (Poppie) was married January 1, 1951 to Mavis Marzella (Trout) Wilson. Together they raised 4 wonderful sons – all of which were active in ministry in their own respective churches. “Poppie” graduated from SIUE with a bachelor’s degree in Business Administration, with an emphasis in Management in 1967. He was previously employed by Hunter’s Meat Packing Plant and later became a union official and bookkeeper with Amalgamated Meat Cutters.

“Poppie” was also a credentialed minister with the Assemblies of God since 1968. He mainly pastored in the state of Illinois with a brief tenure as a professor at Export Bible College (Export, Pennsylvania). He retired from fulltime ministry in 2016 from State Park Assembly of God. He has spent his retirement years as a member of New Rivers Church, Maryville.

“Poppie” lived a God-fearing life full of integrity. While preaching and teaching was one of his favorite things to do, he also enjoyed fishing, watching Cardinal’s games, and of course, eating breakfast at his favorite restaurant (Troy Family). Above all else, “Poppie” enjoyed spending time with his family.

Memorials may be made to New Rivers Church or Vitas Healthcare.  Online expressions of sympathy may be made at www.Richeson fh.com

Richeson Funeral Home is in charge of the arrangements.