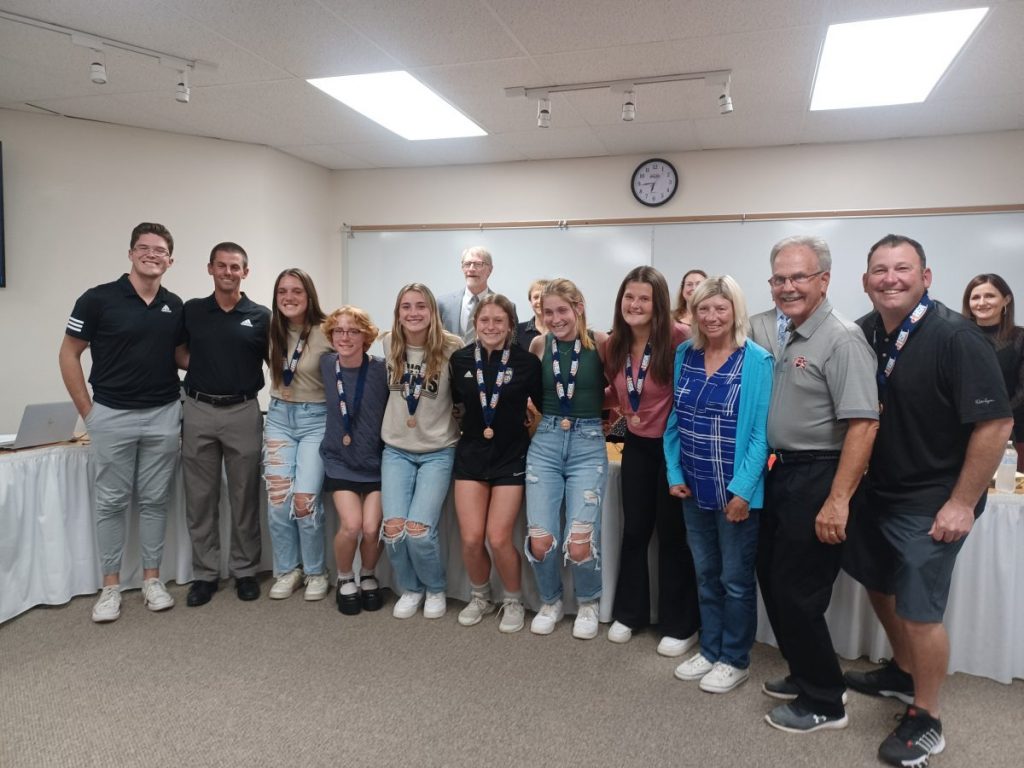 The Triad CUSD No. 2 Board of Education during its monthly meeting on Monday recognized the girls tennis team for its recent third-place finish in the IHSA state competition.

Coach Devan Faulkenberg said he was very proud of what the team has accomplished this season. The tennis team is the fourth from Southern Illinois in IHSA history to place at state.

“It still feels unreal,” Faulkenberg said. “We kind of talked about this as a possibility a year ago, but it was also unexpected. I’m ecstatic.”

During the meeting, board members and those in attendance twice applauded the team’s efforts and success. Coverage of the game is featured in the sports section of this edition of the Times-Tribune.

Under the agenda heading of new business, board members were presented with the fiscal year 2022 audit. Kevin Tepen of C.J. Schlosser & Company spoke to the board on the findings, which reflected no deficiencies in the two areas covered, internal financial controls and administration of federal awards.

Triad High School basketball received approval for an overnight stay to participate in a tournament Nov. 25-26 in Springfield. The Spanish class trip on Nov. 11, a non-attendance day, to the National Museum of Mexican Art in Chicago was also approved.

Donations, approval of resignations and new hires were approved during the new business portion of the meeting.

Several monthly reports from building and program administrators were presented during the meeting. The following is a summary of highlights from the reports due to limitations on space. The reports in many cases are available online in their entirety at: go.boarddocs.com/il/triad/Board.nsf/Public

In his report, Superintendent Dr. Jason Henderson discussed forming a board facilities committee. He also discussed setting a date for a finance committee meeting to cover the topic of new businesses that might be asking for tax abatements.

Associate Superintendent Dr. Rodney Winslow also gave his report to the board which noted the release this week of the Illinois School Report Card. According to Winslow’s report, staff over the past months have studied the data, which “provides us a lens by which we can interpret our progress in providing a high quality educational environment for our community.”

Winslow also reported is going to add their second career pathway to the existing Education Model Pathway already in existence. The Finance and Business Services Model Pathway will provide students with a sequence of courses to prepare them for the business and financial world.

Director of Human Resources and Personnel Dr. Jay Simpson offered some welcome news in his report, telling members that the district now is fully staffed in both the transportation and custodial departments.

Human Resources and Personnel are also currently working on the Equal Employment Opportunity Commission data collection report, which collects staff demographic information and is required by all U.S. schools systems.

Director of Technology Services Mike Wielgus among the items in his report noted the new sound system is up and running at Triad High School turf field. The new system is already showing itself to be a great upgrade to the previous system.

Special Education Director Linda Kowalski in her report congratulated several athletes for their accomplishments at the sectional bowling tournament at St. Clair Bowl. Gold medal winners will advance to the state bowling tournament in Peoria in December.

Also recognized were 10 athletes who competed in a bocce ball tournament that was held recently at Silver Creek Elementary. Many of the participants took home awards.

The next meeting of the Triad CUSD No. 2 Board of Education is scheduled for 6:30 p.m. Nov. 21 at the Central Administrative Office, 203 East Throp Street.