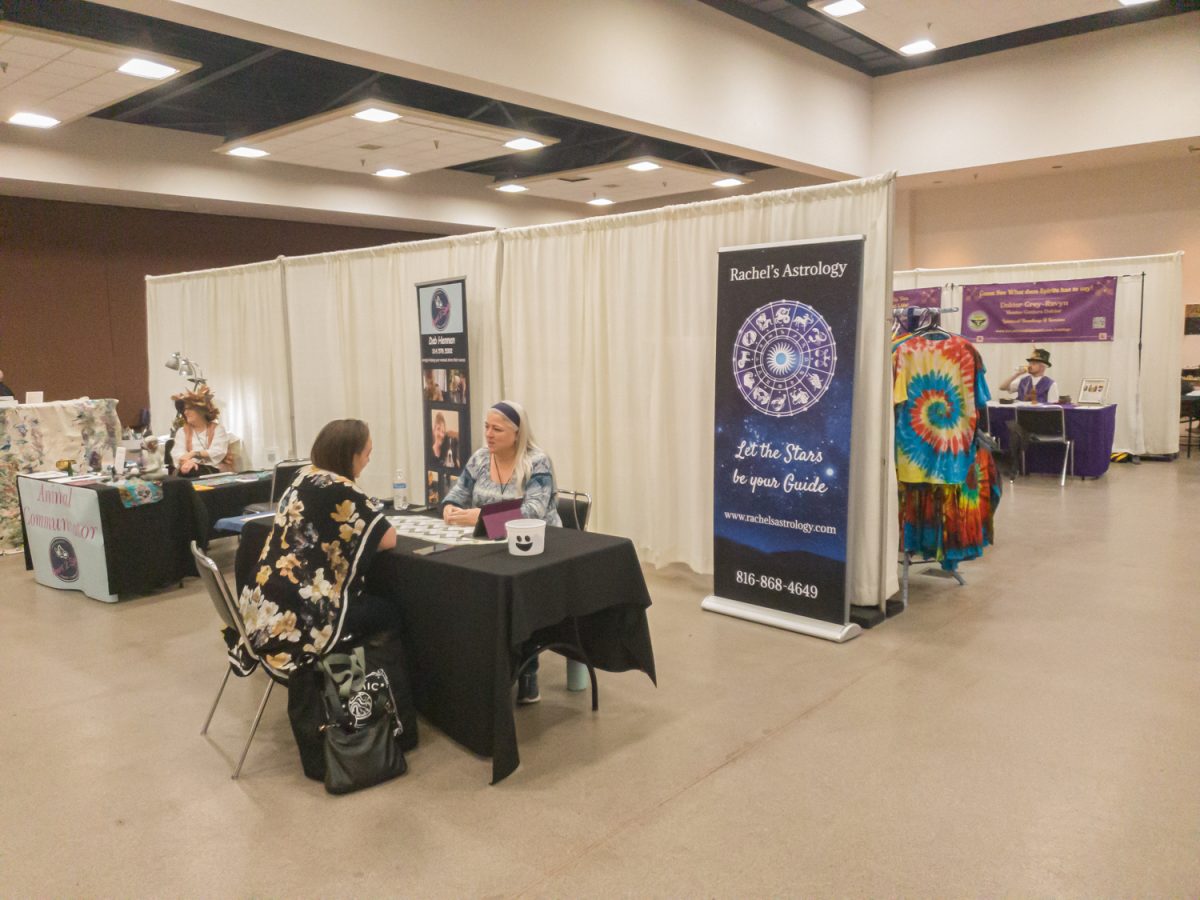 Astrologer Rachel Pearson is giving a reading to one of the fair’s many visitors.

With tarot reading, crystals and more, the KC Metaphysical Fair returned last weekend, bringing a taste of the esoteric arts to the St. Louis area.

The event brings together all sorts of different methods of spirituality, healing and esoteric arts. Those include crystals, minerals and herbs and different practitioners, such as an astrologers, several tarot card readers, an aura photographer and more.

Sylbia Martin, a co-founder of KC Metaphysical, said the goal of this event is to be able to bring all of these different types of esoteric arts together and give the community opportunities to engage and find different ways of healing.

“We want to create a better world in whatever way that is, and I think these are just kind of different ways you can do some of that,” Martin said.

Practitioners from all over the country, including from the original fair in Kansas City are regulars at the fair, with many of them traveling around to different fairs throughout the year.

Rachel Pearson is an astrologer who only joined in recent years travels is from Kansas City and travels with the fair. Pearson said the type of astrology she does is different to what most people think of when it comes to astrology and spirituality, solely because she has a much more comprehensive technique.

“That’s purely sun-based astrology — the stuff you see online is only going to deal with that part of you, your sun [sign],” Pearson said. “In astrology there are 10 planets in your chart and there are 12 houses. There aren’t just 12 types of people in the world, which is what you see online and in the paper.”

Astrology in popular forms of media usually only depict the 12 sun signs: Aries, Taurus, Gemini, Cancer, Leo, Virgo, Libra, Scorpio, Sagittarius, Capricorn, Aquarius, and Pisces. They consist of different personality traits that are meant to define a person’s personality based on their corresponding birth range, many astrologers believe.

Pearson said she first started getting into astrology when she was nine years old when she would get small sun sign scrolls at the store that they had near the checkout line, but that she has been doing it professionally for many years, but is currently making the transition to do astrology readings full-time.

Eric Banks and his wife work together to do aura photography, iridology, and mediumship.

Banks said aura photography involves the use of a biofeedback camera to take a photo of someone’s energy that their body gives off in different colors, each with different meanings.

According to Harvard Health, biofeedback is usually used to detect changes throughout the body, whether they’re changes in skin temperature, brain-wave patterns, muscle tone or pulse with the use of sensors. In aura photography, this is measured by the camera instead.

Banks said his use of iridology involves a holistic side involving emotions and a genetic side when measuring the iris of someone’s eye.

“Everything is genes, it’s all passed down to you … But you can also bring things in in this lifetime as well. Not only do you inherit the genetics of the physical side, you also inherit the holistic side which is the energy side, so the anger, resentment, fear, frustration, peace, joy and happiness,” Banks said.

Jill Slunick is a spiritualist who focuses on the frequency of voice to determine different types of emotions  to try and help people be able to stabilize themselves and give them advice. She also did massage for a while, but stopped during the pandemic.

Slunick said she initially came to the fair in Collinsville due to some friends recommending it to her, but that she intends to keep expanding her practice to different parts of the country aside from her current home in Michigan.

For her particular practice, Slunick said she relies a lot on her own intuition and advises people to listen more to theirs.

“It’s really listening to that quiet voice. You gotta really start trusting to follow the illogical in our logical mind … It’s your gut instincts,” Slunick said.