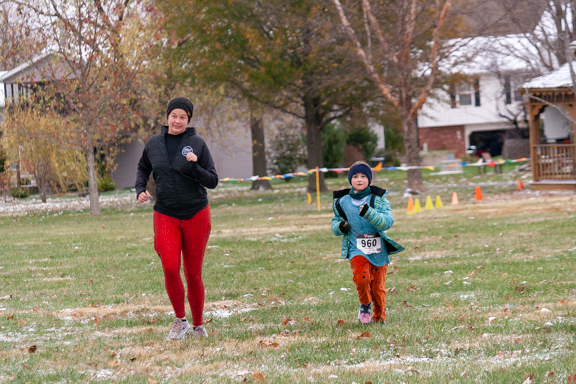 Anna Pajares, a participant of four years is coming in to finish the race with another participant.

This year’s annual Turkey Trot proved to be a smaller one with just over 50 participants due to cold temperatures, but it didn’t stop locals and non-locals from having a good time.

The Turkey Trot is a community event meant to bring people together for an active event, but it’s also there to help the Collinsville cross country team’s booster club. The event draws people from all over the Metro East, as well as runners who participate in runs in different parts of the U.S.

Thomas Fitzgerald, a member of the Maryville Parks and Recreation board and race director of the event for the past four years. Fitzgerald said his initial involvement was somewhat personal due to his daughter.

Fitzgerald said his daughter had also run the race before herself before she went to college two years ago, but that she still runs in events in her area.

He said the event not only helps the cross country team, but that it also helps the Parks and Recreation board to do more community based events.

The event has long ties to Collinsville High School’s cross country team, and 14 of its current athletes came to the event to either join in or volunteer to help run times or hand out medals. The coach of the team, Darryl Frerker, said he’s been involved in the event since the beginning when he worked with his wife to establish it while she was on the Parks and Recreation board.

“Because it is a community event and road races are very popular, [and] they’ve gained a lot of popularity over the years, and being able to be the cross country coach and being involved with this type of event is always awesome,” Frerker said.

Frerker said many of the different area athletes also have participated in the past, both from a high school and collegiate level, but the temperature brought down the turnout quite a bit.

Due to having to usually pay timers and other event staff, Frerker enjoys being able to get the team directly involved to do those tasks for an event meant to help them. Due to his position as a coach, he said he also has access to programs to help time the race, making it easier.

Noah Gallivan, a sophomore of the Alton High School cross country team participated in the event and ended up winning in one of its categories. He said he’s been running since middle school and his involvement in the event came from his coach giving him info about it.

Anna Pajares of St. Jacob, Illinois, is a returning participant and said she initially saw it advertised online and decided to get involved four years ago and has run it ever since.

Pajares said part of her reasoning for coming to Maryville for this specific 5k run was because she knew the area well.

“I like to do 5ks and help the community. It’s a good cause for the cross country team,” Pajares said.