Collinsville has made a living going on big runs for the past few seasons. 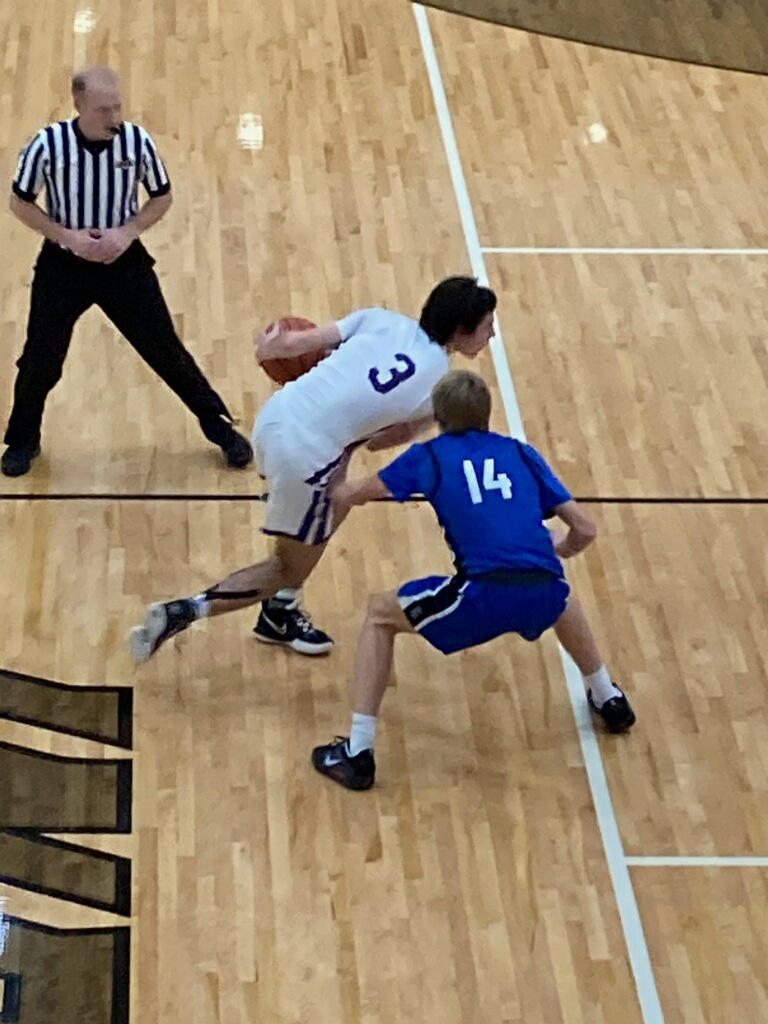 But in the championship game of the Mascoutah Tip-off Classic, Columbia closed the game with a 17-3 run in the final 4:19 to beat the Kahoks when Columbia’s Jack Steckler hit a three from the left wing as the buzzer sounded to carry the Eagles to a 56-53 win Saturday night.

Collinsville struggled for most of the game as the Eagles took a 15-8 lead after one quarter thanks to eight points from 6-8 swingman Sam Donald and ballooned the lead to eleven at the 6:53 mark of the 2nd quarter before Collinsville kicked their pressure defense into gear. The Kahoks forced four Columbia turnovers the rest of the half while outscoring the Eagles 16-7 in that span.

Jamoire Wysinger led CHS with eleven points during that time including a three from the top of the key with 0.9 seconds left to put CHS down by only two points, 26-24 at the half.

The purple and white continued their momentum going on a 12-4 run to start the 3rd quarter and finished the stanza with a 7-2 spree culminated by another late three by Wysinger with 1.3 seconds left to put the Kahoks up eight.

Five different Kahoks had at least a bucket in the third.

Collinsville’s lead swelled to eleven at 50-39 on a put back bucket by Zach Chambers with 4:38 to play. The possession started on the defensive end with a triple team down low by Chambers, Wysinger, and KJ Thorps-Watt. Wysinger came away with the steal.

However after a Columbia time out the Kahoks could only manage two free throws by Nick Horras and one by Chambers the rest of the way while committing three turnovers.

Steckler had ten points for the Eagles during their 4th quarter run.

Offensively Collinsville went 21-for-44 or 47.4 percent from the field while Columbia shot

For Collinsville, Wysinger had 19 points while Jake Wilkinson had 15. Chambers tossed in eleven markers and a team-high five rebounds.

Nick Horras had four assists and four steals to lead the Kahoks.

Collinsville is 3-1 on the young season and plays tomorrow at Belleville East. They open at home Tuesday night against Belleville West. Columbia is now 4-0 on the year. They returned their entire roster except for one player from last season’s 23-9 squad.

While the IHSA has allowed shot clocks for approved tournaments this season, Mascoutah was not one.

Despite a running clock in the 4th quarter the two teams combined to take 111 shots in a 32-minute game.

Collinsville went 26-for-62, a 41.9 percent clip to bury the Rams and win their pool at the tournament Friday night.

A pair of layups to begin the stanza increased the Kahok lead to 20 then a putback off his own miss by Wysinger put CHS up 36-17 at the half.

For the game, Wilkinson had 22 points including four from beyond the arc while Wysinger had 12 points and Stanley Carnahan scored 10 for CHS.

Adam Rimar led the Kahoks on the boards with another double-digit rebounding effort with ten with Wilkinson and Wysinger collecting seven each.

Collinsville dished out 19 assists in the game with Horras collecting seven.

Chambers had three blocked shots at the rim.

Mascoutah was clawing their way back into the game in the last ten minutes but Adam Rimar matched them shot for shot.

The 6-6 senior scored 14 consecutive Kahok points in that span to hold off the Indians and eventually give Collinsville a 13-point win in game two of the tourney on Nov. 22.

“They couldn’t get him stopped and they didn’t want to come off our shooters,” said Collinsville coach Darin Lee. “So he just went to work down there and went one-on-one and was able to finish.”

Rimar tossed in a left-handed hook shot with 1:56 to play in the third to put CHS up 36-26, but Mascoutah’s Ian Thompkins buried consecutive threes to make it a four-point game with 37 seconds to play in that same quarter.

However Rimar hit a bucket with 15 seconds to play to make it 38-32 before the final stanza.

Rimar traded buckets with Quincy Hall, Jr. and Miles Ntekop to keep the CHS lead at six, then proceeded to hit three more buckets while Mascoutah came up empty.

CHS went 5-for-8 from the floor in the final quarter while the Indians went 2-for-14 including 0-for-5 from three.

Collinsville never trailed in the contest however Mascoutah knotted the score three times in the opening frame. The largest lead for CHS in the opening half was eleven after a 5-0 run by KJ Thorps-Watt and Rimar.

The CHS lead was six with eight seconds to play in the half when Lee rolled the dice for a late bucket.

Horras had picked up his second foul a couple of minutes earlier and went to the bench. He returned during Ntekop’s free throws. After the second one was made Horras got the ball on the inbounds and brought it up the right side. He beat a Mascoutah defender to the left on a crossover dribble and hit a runner from the right block as

the buzzer sounded to give CHS an eight point cushion.

“That was big, he had two fouls and we snuck him in,” said Lee. “The only thing you worry about is him picking up a charge but it’s worth it because he’s our best point guard type. He can take it, shoot it or kick it to Jamorie or Jake.”

That was the culmination of a big half for Horras. He had ten points in the opening quarter to stake the Kahoks to a 16-10 advantage.

“Nick played well early,” said Lee. “He really got us going by knocking some shots down.”

For the game, Horras had 18 points to lead all scorers while Rimar had 16 and Wilkinson had eight.

Rimar had eight rebounds while Thorps-Watt had seven. Chambers had six.

The Kahoks got off to an 8-0 lead and led all the way as they opened their season with a 57-44 victory over Marion on the opening night of the Mascoutah Tip-Off Classic.

“We got off to a great start, Wysinger hitting the first two threes really got our season started off well and we jumped out to a big lead,” said Collinsville coach Darin Lee of the Nov. 21 opener. We got off to great starts at the start of the first quarter and the third quarter that was the difference in the game.”

Wysinger’s consecutive threes from the left wing got CHS out early and he added to that with a layup for their initial eight-point lead. He would add another bucket for ten points for the quarter. Wilkinson added six points while Horras had three. Rimar also had a bucket.

Collinsville led 21-8 after one quarter.

CHS went 7-for-10 in the first including hitting 67 percent of their threes.

The Kahoks carried a 30-20 advantage into the locker room and proceeded to go on a 12-2 run to begin the 2nd half.

The Wildcats finished off the quarter with a 12-5 run and eventually cut the lead to eight with 5:23 to play but a pair of free throws by Horras and five points from Rimar sealed the victory for Collinsville.

The Kahoks committed eleven turnovers on offense and only forced seven by Marion. Lee had mixed

reactions about the game the Kahok defense played.

Wysinger led CHS with 18 points while Wilkinson had 16.

Rimar had a double-double with eleven points and eleven rebounds. Wysinger and Chambers had six rebounds each. Horras and Wilkinson each had three assists.