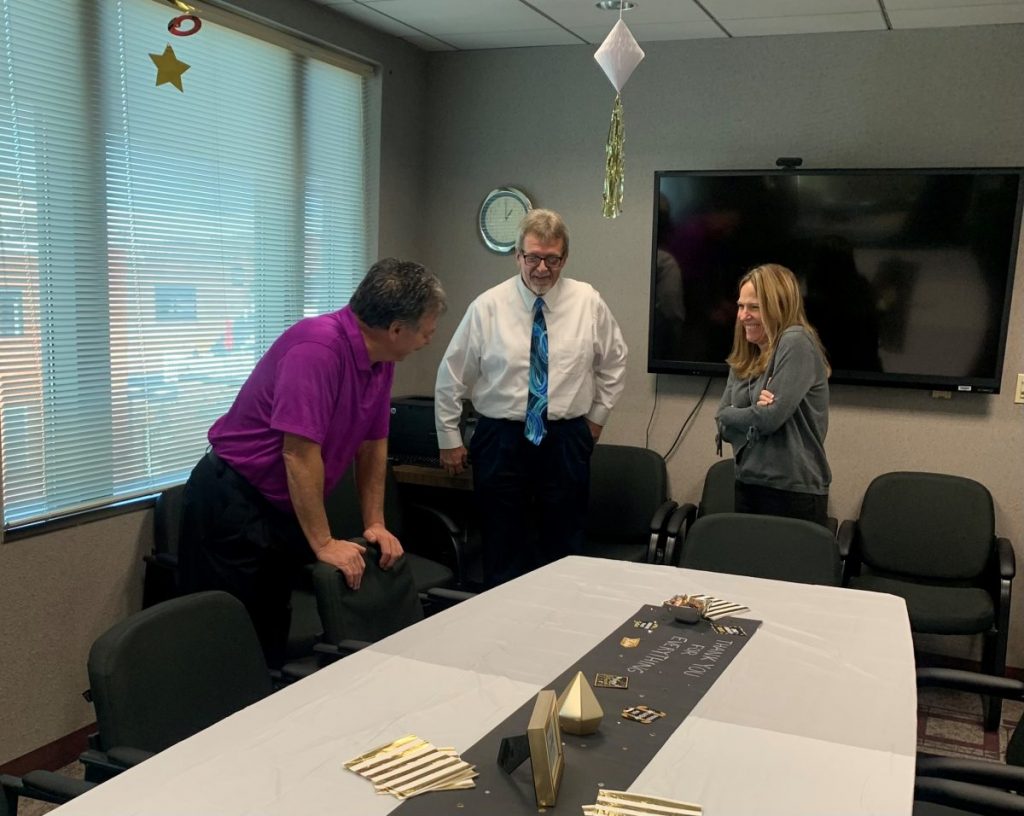 Madison County Safety and Risk Manager Stacey Perjak stopped by the Chief Assessment Office to congratulate Chief Assessor Joe Dauderman (Center) and Deputy Assessor Phil Byers (left) on Friday to congratulate on their retirements. Dauderman will retire at the end of February and Byers worked his last day on Friday. Photo provided by Madison County

Joe Dauderman, who became the Chief County Assessor for Madison County in May 2013, has said he will retire at the end of February. His chief deputy, Phil Byers, retired Friday. Dauderman began working in Madison County in April 1985. Byers came on board in September 1987.

Dauderman and Byer’s replacements have yet to be selected. Board Chairman Kurt Prenzler said their departures mark a huge loss to the county.

“The retirement is a huge loss to Madison County,” Chairman Kurt Prenzler said. “They are taking with them a combined 72 years of experience.”

The assessor’s office determines the value of all taxable property in the county and decides when adjustments are needed based on various laws and exemptions.The news release states during Dauderman’s tenure, he watched the county’s property value increase and the office take on additional responsibilities in assessing property.

Dauderman now oversees a staff of 21 that assesses 135,000 parcels, to include everything from residential to commercial, industrial, utilities, railroad and more.

“It’s been rewarding serving as the county assessor,” Dauderman said. “I’m looking forward to spending time with my grandkids now and visiting as many dirt racing tracks as possible.”

He said he and his wife, Deanna, so far have visited 54 tracks in 11 states.

Byers said he’s enjoyed his time at the county, but he’s ready to spend time playing golf, learning how to play tennis and visiting the Chicago Cubs spring training camp in Arizona, which is on his bucket list.

Newly elected County Board member Fred Michael worked with Dauderman when he was supervisor of Maps and Plats until his retirement in November 2022. Michael said that Dauderman is a man of few words, but when he does speak, it is valuable information.

“Joe’s done a great job for Madison County,” Michael said. “He’s always tried to do his best for the taxpayer. If he didn’t know something he would research it to find the solution.”

Treasurer Chris Slusser said he’s had an excellent working relationship with both Dauderman and Byers. He said the Treasurer, County Clerk and Chief County Assessment offices work together during  the tax cycle process.

“It’s truly been a pleasure working with them,” Slusser said. “Unlike other counties, we’ve never had any issues between our offices. The county has some big shoes to fill with their retirements. They are both true, humble public servants.”