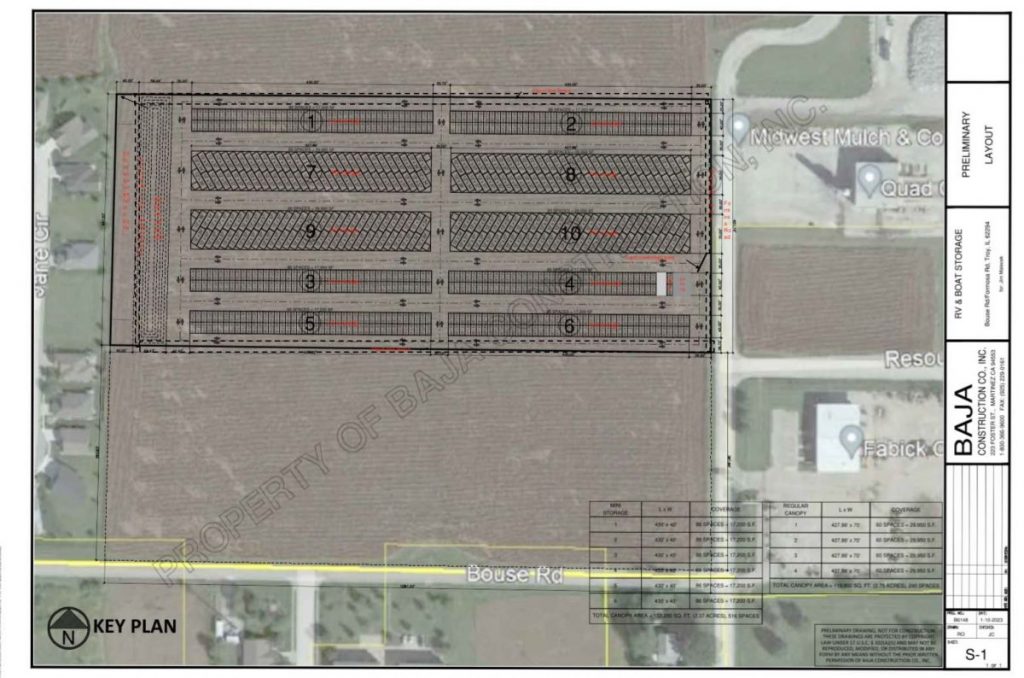 Developers during a Jan. 12 meeting of the Troy Planning Commission unveiled a new design for a property at 2466 Formosa Drive. The new layout includes an approximately 100 foot buffer between the business and an adjoining neighborhood, residents of which have voiced opposition to the zoning change.

On its second round of discussion by the Troy Planning Commission, a contentious zoning change to a property located at 2466 Formosa Drive was recommended to be rezoned from residential to light industrial.

The vote during the Jan. 12  meeting was the second regarding rezoning the property. Commission members at the Dec. 8 meeting voted to rezone the property from residential to commercial, a move which was met by opposition from residents of an adjoining 55-plus living community.

At the Dec. 19 meeting of the Troy City Council, the change from residential to commercial was sent back to the Troy Planning Commission for further review. The consensus among city officials was light industrial would generate less traffic than commercial, traffic being a point of contention with neighbors who felt that was a significant quality-of-life concern.

James Malecek, of St. Louis, who seeks to purchase and develop the property to offer storage units, as well as boat and recreational vehicle storage, was present at the meeting Jan. 12, and sought to address other concerns of adjoining homeowners.

Malecek, at the meeting Jan. 12, provided an updated preliminary site plan. The new plan shows that on the west side of the property there will be a 100-foot buffer zone between the business and the neighborhood. In that buffer will be a 6-foot tall vinyl privacy fence, a green space with vegetation and a water retention pond.

The layout of the storage area also changed significantly from its previous rendition. Storage for recreational vehicles and storage units will now run east and west along the property, as opposed to an earlier graphing which showed the units running north and south. The RV and boat storage spaces will now also be covered by a canopy, Malecek said.

Neighbors still had several concerns regarding the new business. Those included lighting, aesthetics and one repeatedly voiced – water runoff.

Prior to being annexed by the city in October, which resulted in the change to a default zoning of residential, the land was historically set aside for agricultural use. The water table in the area, residents said, is very high and flooding is a constant concern.

However, City engineer Tom Cissell said that was not a zoning issue and not in the planning commission’s purview. He said Malecek is responsible for conducting a draining study prior to the issuance of a building permit. That study would also be reviewed by Cissell.

The vote by the planning commission to make the change is only a recommendation, members said. The Troy City Council will have final say over the rezoning at the Jan. 17 meeting, where a resolution is listed on the agenda. The next meeting is set for 6:30 p.m. Jan. 17, a Tuesday, as the normal meeting time of Monday falls on the Dr. Martin Luther King Jr. Holiday.