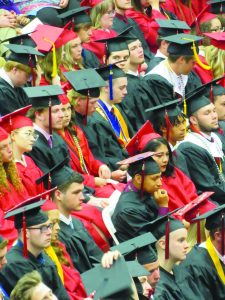 Graduates at Triad High School joined others throughout the Metro East this weekend to celebrate commencement exercises and a new chapter in their lives. Photo by Steve Rensberry

Just over 250 graduating seniors at Triad High School received their diplomas this past weekend, on May 19, during the school’s 60th Annual Commencement exercises.

Highlights included a prelude by the Triad High School Band, with the customary playing of “Pomp and Circumstances,” led by Band Director Kevin Devany.

The entrance by graduating seniors and triad district faculty was following by some words of welcome from THS Principal Dr. Rodney Winslow, and a moment of silence in memory of Dominick Luchesi and Jonas Scharadan.

Parents and relatives of the students applauded at several times throughout the ceremony to show their appreciation, with recognition given to military service members, accomplished students, and others.

Superintendent Leigh Lewis introduced members of the board of education and addressed the students before introducing keynote speaker Dawn Mushill.

Mushill is not only a Triad grad herself, but an author, keynote speaker, and director of the Troy/Maryville/St. Jacob/Marine Chamber of Commerce — which she has directed for 19 years. She holds both undergraduate and graduate degrees, having attended Southwestern Illinois College (where she serves on the faculty), Southern Illinois University Carbondale, and Western University.

Speaking about people who may discourage you from fulfilling your dreams, Mushill cited an incident in her own life as a teenager, when she was told she would never do anything more than waitress for the rest of her life.

“Surround yourself with people who get you, and want you to succeed. You define what success means,” Mushill said.  “Do not spend time with those who are not on your side.”

Troy Mayor Al Adomite was among those she cited who have inspired her. Adomite is a Triad graduate and was recently accepted in the University of Illinois’ program to work on his doctorate in public administration.