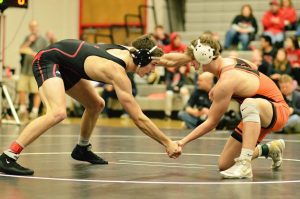 “Well going in our goal was top 15 some people think top 15 is not a good goal but at this tournament, for a school like us, if you’re a top 15 team in this tournament you’ve had a decent day,” said Triad coach Russ Witzig.

Garrett Bakarich continued his strong senior campaign with a tournament win in the 152 lb. class.

Bakarich, the tourneys #4 seed, won seven matches on the mat during the two day tourney. He recorded three pins along the way.

“I think he gets overlooked a little bit because he’s not one of these flashy guys that’s really super explosive. He’s just tough, grinds it out, doesn’t make mistakes,” Witzig said.

In the semifinals he outpointed Cayden Auch of Neosho (Mo.) 4-1.

Auch was runner up in his class in Missouri last year and was ranked #1 this year. He finished the tourney at 30-2 on the year.

“The kid is super tough but Garrett just wanted the match, he wrestled solid to the end. That kid made a mistake and Garrett took advantage of it. Garrett’s just an overlooked wrestler because he’s not flashy. He’s as tough a kid as you want to find,” said Witzig.

In the finals he beat Cole Watkins of Washington 7-1. He had defeated Watkins via major decision in round four.

At 113 lbs., Triad’s Chase Hall had five wins on the mat with two pins. He defeated Jacob Jensen of Huntley 5-1 to secure 5th place.

“I felt he wrestled really solid and I think he’s wrestling as good as he’s ever wrestled,” Witzig said.

Collin North finished in 7th place at 220lbs. after an 11-0 major decision over Evan O’Connell of Lafayette (Mo.).

“He wrestled well. He wrestled two Missouri guys that are ranked in the top three in their state and lost close matches to both of them. He’s a guy we can count on, he’s very consistent,” Witzig said.

Everett Walsh finished eighth in the 285 lb. class. He fell in his final match to Doran Arguelles of Granite City. Walsh picked up two pins at the meet.

“He can beat some really tough kids, then lose to some kids he probably shouldn’t lose to. I felt like he got better this weekend. The good thing is he can get a whole lot better the next five weeks,” commented Witzig.

Kaden Marmon finished ninth at 182 lbs. after beating Colton Crowley of Mahomet-Seymour by a 4-0 decision. He picked up four wins and three pins over the two days.

“I know he only got 14th but he wrestled tough against some good kids. He might have finished 14th but he had a good tournament. He’s coming along where he should be,” Witzig said.

Jordan Clines had an 18th place finish at 160 lbs.

Landon Tourville, at 170 lbs., rounded out the scoring by placing 20th.

Triad will host their only home match of the season this Saturday. The triangular with Cahokia and Belleville West begins at noon.