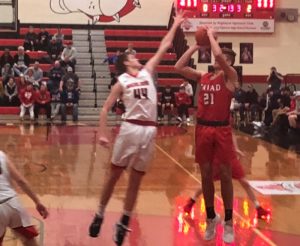 Junior Wally Good loads up for a jump shot against the rival Highland Bulldogs. This was the Knights second game in 15 hours. Photo by Anthony Jones.

The Knights basketball team delivered three wins against conference opponents this week. The trio of impressive performances improved their record on the season against MVC foes to 5-0 and 12-4 overall.

The week started off with a Tuesday evening home game against the Civic Memorial Eagles. The visiting squad came in with a record of 3-9. It was also the second game versus the Eagles of the year.

Triad played on a much higher level to control a 19-5 lead at the end of the first quarter. They started off the second quarter with a 12-0 run to extend up to a 31-5 advantage. At half time, the Knights held a 40-17 lead, with Luke Cox accounting for half their points.

The third quarter saw the Knights lose one point of their lead but still winning 53-31. The Knights finished off the game strong and won 71-43. Cox led the team with 28 while Winslow and Tentis added 16 and 13, respectively.

On Friday night, Triad hosted a physical Jerseyville Panthers squad. The matchup was for the lead in the MVC on the season.

The first quarter was close and Triad ended it with a 20-15 lead. Triad played well in the second quarter and took a 37-26 advantage. Cox dropped 20 points at the end of the first half for the second game in a row.

Jerseyville fell even further behind after the half time break. The Knights expanded their advantage up to 49-32. Triad held on in the fourth quarter and won 65-50. Cox led the squad with 31 points and junior Kile Crook drained several threes to earn 14 points.

Less than 24 hours later, the squad traveled to play the rival Highland Bulldogs at the high level Highland Shootout. The Bulldogs entered the contest with a much worse record but it was not very noticeable as they only trailed 18-13 at the end of the first quarter. The half ended with the Knights winning 33-19.

The third quarter saw the visiting team expand their lead slightly to 44-29. They continued to dominate until the game ended with a final score of 56-37, in Triad’s favor.

Cox led the team yet again with 31 points, pushing him to 90 points on the week. He also tagged on 11 rebounds. Winslow tacked on 12 of his own in the victory.