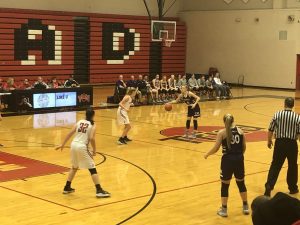 On Thursday night, the Lady Knights hosted conference foe Civic Memorial. The Eagles entered the contest 24-4 on the season. The Eagles also were in the lead of the MVC.

The home team fell behind early and was down 13-4 halfway through the first quarter. Later on in the first quarter, Triad was down 20-11 with all of their points coming from Alyssa Powell. Avery Bohnenstiehl added two points for the Knights to trim the lead to 20-13.

Powell added on three more points for the team late in the quarter to give a total of 14 in the opening period and make the score 20-16. Civic Memorial hit a late three to give them a 23-16 lead at the end of the first quarter.

The second quarter got off to a slow start as the first points were scored with over a minute and a half into the quarter that put the Lady Knights down 23-18. The Eagles came fighting back and extended their lead to 30-20. Triad responded with a 6-0 run to draw the gap to 4 points, but Civic Memorial finished the quarter with two more points to take a 32-26 advantage into the half. Powell led the Lady Knights with 14 points at half, all of which were scored in the first quarter. This score was a dramatic improvement compared to an earlier season contest with Civic Memorial, which saw Triad trailing 40-10 at half time. The Eagles went on to win that game 67-19.

In the third quarter, the Eagles took a commanding lead. This came as the Eagles went on a 7-0 lead to open the period. Triad trailed by a score of 45-32.

Unfortunately for Triad, the fourth and final quarter was the Eagle’s best of the day. This allowed them to win by a final score of 65-42. Powell led the Lady Knights with 17 points on the day and Bohnenstiehl added ten of her own.

Earlier in the week, Triad defeated the Granite City Warriors. The Warriors entered that match with a record of 4-16. It was a closely contested match that Triad led 25-19 at half. They won by a final score of 55-43.

To end the week, the Lady Knights travelled to Gillespie High School on Saturday. The hosting Miners entered that contest with a 15-11 record. Triad managed to win a low scoring affair by a final score of 39-29. Overall, it was one of the team’s best defensive performances of the season.

Another solid week by this Triad squad has moved their record up to 11-16. The team is now on a stretch of being 7-5 after starting the season off 4-11. The Lady Knights have an upcoming visit to Waterloo on Thursday. It will be a conference rematch of a game that Triad won 45-32 earlier this season.