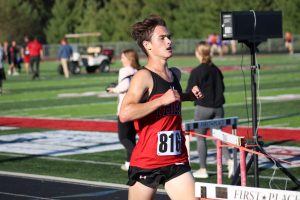 Triad’s girls squad would finish in second overall during their trip to Principia College. Their team tally of 62 points was 40 behind champion Waterloo and 23 ahead of third place Mascoutah.

Senior Blaire Cunningham reached the finish line first for the Lady Knights. Her time of 19:51.80 placed her seventh overall.

A time of 20:15.60 made Kennedy Bowman the second faster Triad representative. The sophomore’s time was the ninth fastest overall and third among underclassmen.

Chloe Gough provided another low scoring finish after battling into sixteenth place. This placement came courtesy of a 20:39.70 mark.

The highest placing freshman for any team was Triad’s Morgan Mason. Mason found herself in eighteenth place thanks to a 21:01.50 performance.

21:24.80 was the next moment a Lady Knight broke the finish line, coming from Amanda Bagwell. The junior relayed this time into twenty second overall.

Freshman Abigail James closed out the girls race for Triad. A twenty ninth place finish was appropriate for the first year runner who clocked in at 22:21.40.

Triad held their own in the boys race as well. A team tally of 66 points made them a close third to second place Waterloo’s total of 60.

Drew Pace headed up Triad’s efforts, fighting into third overall. The standout’s time of 15:50.30 reigned supreme of any non-senior runner and earned the junior an all-conference spot.

Another MVC medal was earned by Drew Twyman. A sophomore, Twyman raced through the course in 16:23.60 and took eighth overall.

The Knight’s fastest senior on the course was Ben Winslow. Winslow charged into sixteenth time off of a 16:46.60 performance.

Another top twenty finish came when Dalton Mersinger found the end line in 16:52.70. This placed the junior in nineteenth overall.

Five spots later, Sam Kuckuck ran another scoring finish for the Knights and wound up in twenty fourth as an individual. A time of 16:52.70 earned this placement.

Further contributing to Triad’s efforts was Jacob Metcalf. The junior wedged himself into twenty seventh place with a 17:23.70 mark.

The IHSA State Series will begin on Oct. 22 for Triad as they compete in the Highland Regional. If the teams advance for the Alhambra meet, they will compete seven days later at the Glenwood Sectional.