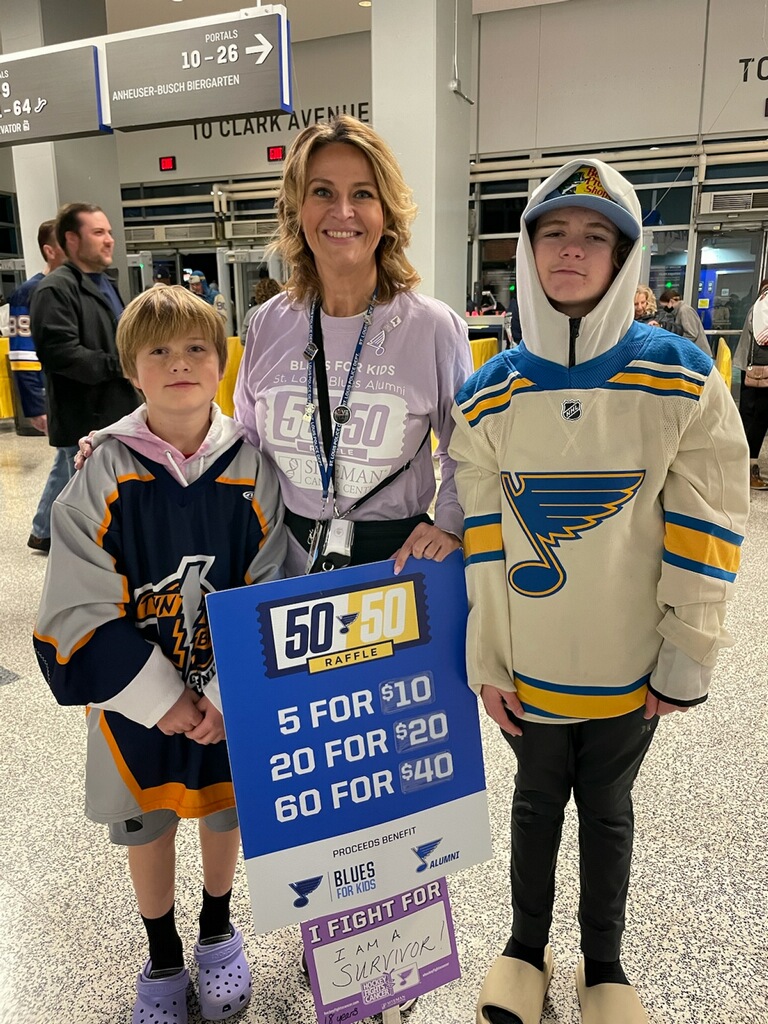 Andrea Miller (center) who battled stage four esophageal and recovered in 2006, was given recognition Dec. 1 as the Blues faced the Hurricanes. Pictured with her sons Holt (left) and Reid (right) the family are now supporters of the Blues’ efforts to raise funds and awareness in partnership with Siteman Cancer Center.

Hockey fan Andrea Miller, of Maryville, recently celebrated 15 years of being cancer free with a special recognition by the St. Louis Blues.

On Dec. 1, the Blues hosted its Hockey Fights Cancer game against the Carolina Hurricanes. At the game, Miller, along with her two sons, was asked to ring the Siteman Cancer Center bell, celebrating her recovery with the thousands of fans at Enterprise Center and watching at home.

“My favorite game of the year is the Hockey Fights Cancer game, because it does bring awareness to the fight against cancer,” Miller said. “This year the 50/50 proceeds went to Siteman Cancer Center, which is near and dear to my heart, because that’s where I received all of my treatments.”

A video of Miller ringing the bell is available on the Triad Knights Hockey Facebook page.

Miller was diagnosed in 2004 with stage four esophageal cancer. She was 27 at the time and was given only a 4% chance to make it into her 30s. Her doctors told her she would be lucky to live another two years.

“When I was diagnosed, the prognosis was not good,” Miller said. “I had cancer in my stomach, my esophagus, my liver and my lymph nodes. And it quickly became a life-prolonging situation, as opposed to looking for a cure at that time.”

Miller began treatment at Siteman Cancer Center and after surgery and chemotherapy, in 2006 she was determined to be cancer free. She said her doctor told her that her recovery was “miraculous,” given her slim chance of survival.

In addition to a positive attitude, Miller also attributes her family and support system for helping her through the illness. She says her father and mother, who passed away last year, were a source of strength, as were her sister, grandparents and many others in her life.

“What kept me strong through all of this was just my family and the will of wanting to live,” Miller said. “For me, it was my mom, my dad, I have a sister, I have some grandparents, but my mom was my best friend.”

After her recovery, Miller had two sons and as one might guess, they are also hockey players. Her son Reid is on the Triad JV team and her son Holt plays for the Twin Bridges Lightning.

She’s also found another family with the Blues organization, who partners with Siteman Cancer Center to raise funds and promote cancer awareness.

“I am actually part of the Blues family,” Miller said. “I have been a fundraiser with the 50/50 raffle program for 10 seasons. Being part of that community, I take great pride in going to the games and helping raise money, whether it be the Blues for Kids community or we pick several charities throughout the year.”

Miller said she wants anyone battling cancer to know that even if times seem dark, they should try to stay strong.

“Miracles do happen,” Miller said. “I am living proof. Have faith. Have a positive attitude. Don’t give up.”