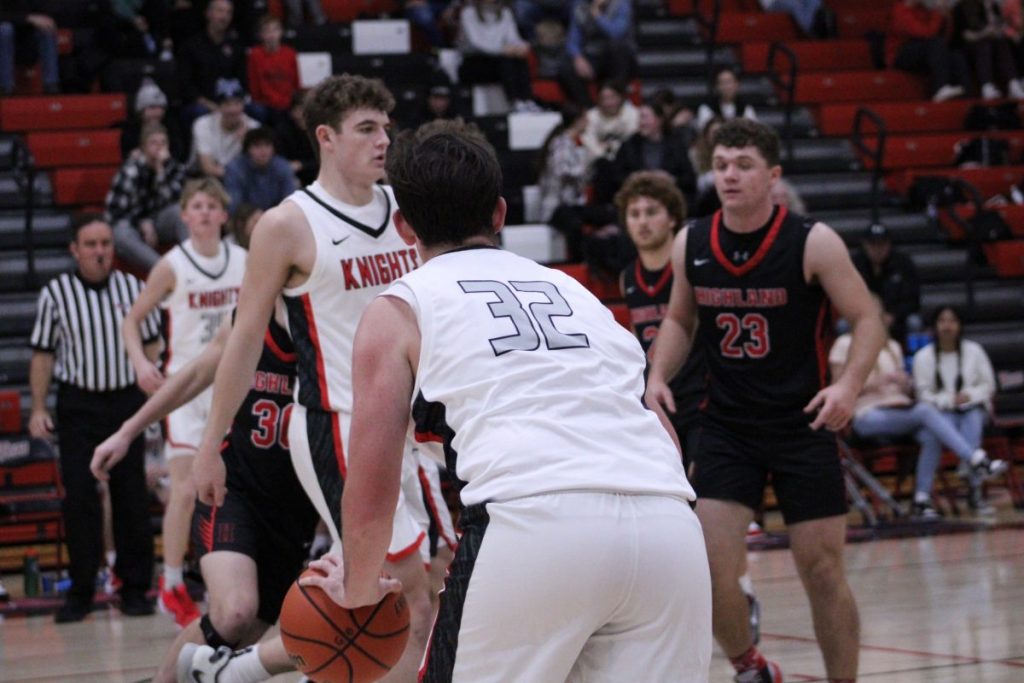 AJ Mills possesses the ball against Highland. The senior scored eight first half points in the loss.

The stakes were high on Dec. 16 when Triad basketball hosted Highland.

Highland, who started 0-2 in Mississippi Valley play, needed a win to close the gap between Mascoutah, Jersey and Triad who were off to 2-0 starts. A Triad win was necessary to stay tied atop the league standings, as a simultaneous game between Jersey and Mascoutah would improve the victor to 3-0.

The importance of the matchup shined through with a competitive first quarter that saw no leads bigger than three points. Two late free throws from Highland would give the visitors a 13-12 lead at the end of the period.

A turnover filled second frame saw both teams slow on the offensive end. The Bulldogs would be held to just two three-point baskets, while the Knights racked up nine points to take a 21-19 advantage into the intermission.

Triad looked to break the game open out of the half with a 4-0 run, but a 10-0 Highland run quickly erased this work and gave the visitors a 29-25. Baskets from McGrady Noyes and Drew Winslow would tie the contest at 29-29 with the fourth quarter to play.

After hitting their tenth three point shot of the game, Highland took a 43-40 lead with less than two minutes to play in a fourth quarter with several lead changes. The Bulldogs closed the night out at the free throw line to take a 51-43 victory.

Coach Jeff Guidry expected their rivals to play like their season was on the line, “They did and they had big shots. We did not shoot the ball well at all, so I think that was the big factor.”

Noyes finished as Triad’s leading scorer and rebounder with respective totals of 12 and 7. AJ Mills and Tyler Thompson both finished with ten points.

Even with a loss, the Knights will have a chance to tie for the conference lead with a Dec. 20 hosting of Mascoutah. The Indians are off to a 3-0 start in MVC play and have not lost a league game since the beginning of 2020.

“We have to just move on from this one. I know this game’s important to our guys, especially our seniors, and I told them we’ve just got to wake up tomorrow and get ready for the next one,” Guidry said of his bounce-back opportunity against Mascoutah.

Triad now stands at 7-3 on the season after a 6-0 start. The three teams to defeat the Knights have a combined record of 22-7 so far.

Guidry is still content with his team’s strong start, “There’s a lot of basketball left. We like to look at things in 10 game chunks. We’re 7-3 through 10 games and against a very difficult schedule, so I’m pleased with where we’re at.”