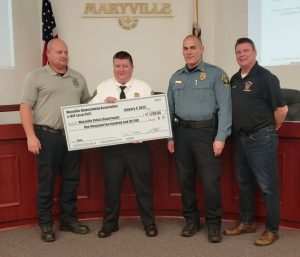 The Maryville Homecoming Committee and the IAFF Local 4531 presented a check to Police Chief Robert Carpenter and Deputy Chief Tony Manley in the amount of $1,200. The funds will be used to purchase a new taser for the department. Pictured are Darren Pugh, President of the IAFF 4531, Chief Robert Carpenter, Deputy Chief Tony Manley, and Darren Hartman.

The Maryville Village Board on Wednesday, Jan. 4, approved the final plans for a new Scooters Coffee Drive-Thru. The drive-thru coffee shop will be built at 2119 S. Center Street in the Village. This is the final step in the process to allow construction to begin.

In other business, Darren Hartman and Jason Pugh of the Maryville Fire Department were in attendance for a check presentation. The Maryville Homecoming Association and the IAFF Local 4531 presented a check in the amount of $1,200 to Police Chief Robert Carpenter. The funds will be used to purchase a new taser for the department.

The Village Board approved the purchase of new holiday decorations for the village. Four-foot candy cane and star snowflake decorations will be purchased from Holliday Outdoor Décor at a cost of $21,974 for the 2023 holiday season.

Chief Robert Carpenter and Deputy Chief Tony Manley will be attending the Criminal Justice Summit in Effingham, Illinois from Feb. 28 through March 2 on approval by the board. The conference expenses are estimated to not exceed $1,000.

Finally, the board approved the appointment of Gregory Voudrie to the Police Pension Board to fill a vacancy. Mr. Voudrie is a retired police officer and looks forward to serving the community.