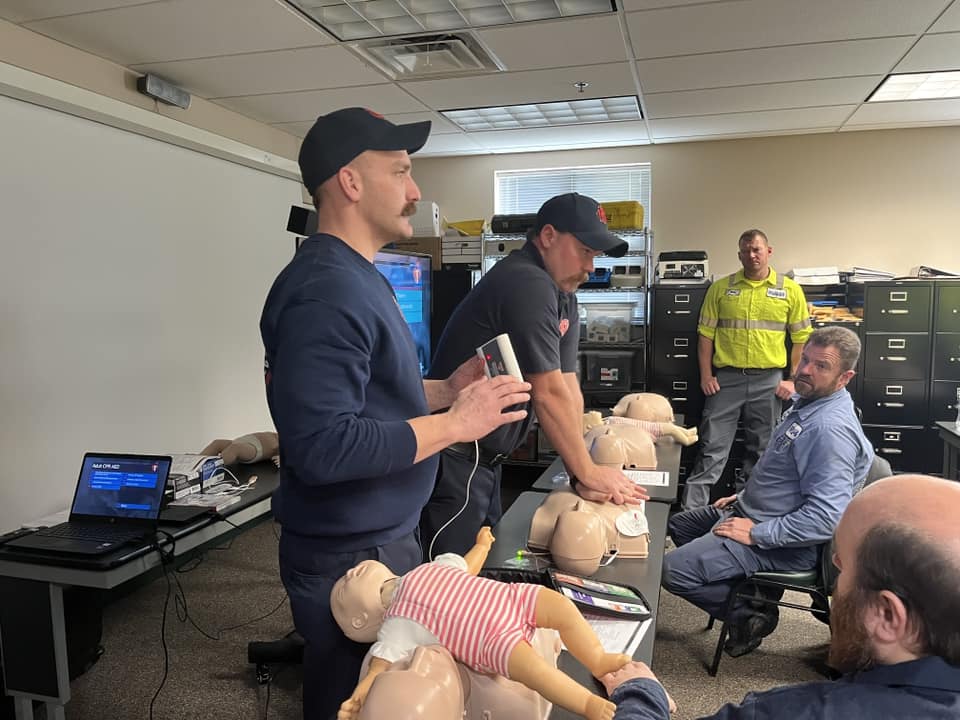 Many people recently became aware of the importance of cardiopulmonary resuscitation or CPR while watching a Monday Night Football game. Trainers rushed to the aid of Damar Hamlin, a 24-year old professional football player for the Buffalo Bills using CPR and other life-saving measures as he lay in cardiac arrest.

The Collinsville Fire Department and the City are taking the initiative to be proactive with CPR promotion and training while this window of awareness, per se, is wide open. The fire department is training city staff and employees on CPR and heart-saving techniques with the Automated Electronic Defibrillator (AED).

Firefighter/Paramedic Eric Freeman is one of the CPR instructors for the Collinsville Fire Department and he explains the importance of learning to perform CPR correctly.

“It’s important to know how to do CPR correctly,” Freeman said. “If not performed in the appropriate way you’re not going to get quality compressions which helps blood flow through the body.”

Freeman believes the incident that happened on television brought some insight into what CPR can do for someone in cardiac arrest. “I think the incident on the football field opened the eyes of people kind of paying close attention to CPR and wanting to get trained,” he said.

“It was a nationally televised event and everyone saw what happened,” Freeman said. “The fact that someone is going into cardiac arrest and getting compressions as well as that first shock with the defibrillator can have a dramatic effect.”

Someone having a medical issue that requires live-saving techniques can also happen at any time, as evidenced by the Monday Night Football incident.

“Another thing it shows is that you don’t have to have some kind of significant medical history to go into cardiac arrest,” Freeman said. “ Harmin was a fit 24-year professional athlete that went into cardiac arrest, so it could happen to anyone, at any time and in any place.”

The fire department has seven firefighters/paramedics trained as CPR instructors and they offer monthly classes to the public on the first Wednesday of every month. Collinsville residents are charged $25 per person and non-residents $50 per person to learn heart-saving techniques, like CPR, compressions and how to use an AED.

Freeman said the idea came about when Dennis Kress, public works director, asked if the fire department could provide CPR and first aid training to his 45 employees. The department made it possible to get all of them through by taking in 12 city employees per class.

Chief John Bailot, of the Collinsville Fire Department said the city would love to have all of their employees trained to the level of CPR. He said that it’s important for the layperson to understand the importance of CPR and that CPR saves lives. “It’s a combination of CPR and quick defibrillation,” he said.

“In addition to the public works department, we had employees from IT, city hall and some from the parks and recs department come through and get trained,” Bailot said.

Freeman said they are instructed and taught for every minute that you don’t do compressions that’s 10% off of your survivability rate, so every minute that goes by the chances of you surviving gets less and less.

“A system has to start with somebody recognizing that a person is actually in cardiac arrest,” Bailot said. “Then a call for help to get advanced care coming and immediately start some action. The outcome is the story at this point because of the efforts.”

“Another thing it shows is that you don’t have to have some kind of significant medical history to go into cardiac arrest,” Freeman said. “ Harmin was a fit 24-year professional athlete that went into cardiac arrest, so it could happen to anyone, at any time and in any place.”

Bailot also felt that the incident on the football field brought a higher awareness of CPR to the public. The real message from that was Hamlin being able to walk out of the hospital with little to no deficit due to people knowing what  to do in that situation.

“That’s what we want to get out to everybody,” Bailot said. “Learn CPR. Learn from this incident on the football field and see exactly how your efforts with CPR and an AED can actually save somebody’s life.”

Bailot declared that he would like to see more businesses in various locations throughout the city set up with AEDs. He said the fire department would be using their social media platforms and other outlets to promote the importance of the AED and learning CPR to the public.

“That’s a program that I would like to see in our community blossom even more than it is so that we have AEDs all over the place.”

Mariell Jessup, MD, chief science and medical officer of the American Heart Association explain the importance of having access to an AED.

“More than 70% of cardiac arrest that don’t happen in the hospital occur in a home where access to medical professionals and an AED is not readily available,” Jessup said. “Recognizing  a cardiac arrest, calling 911 immediately, performing CPR and using an AED as soon as it is available are critical for survival.”

“As you can imagine, despite the best efforts of EMS teams, if no or ineffective CPR happens prior to EMS arrival good outcomes are difficult,” Nikolaisen said. “As we all know by now, the ‘chain of survival’ begins with what care is delivered at the community level before EMS arrives.”