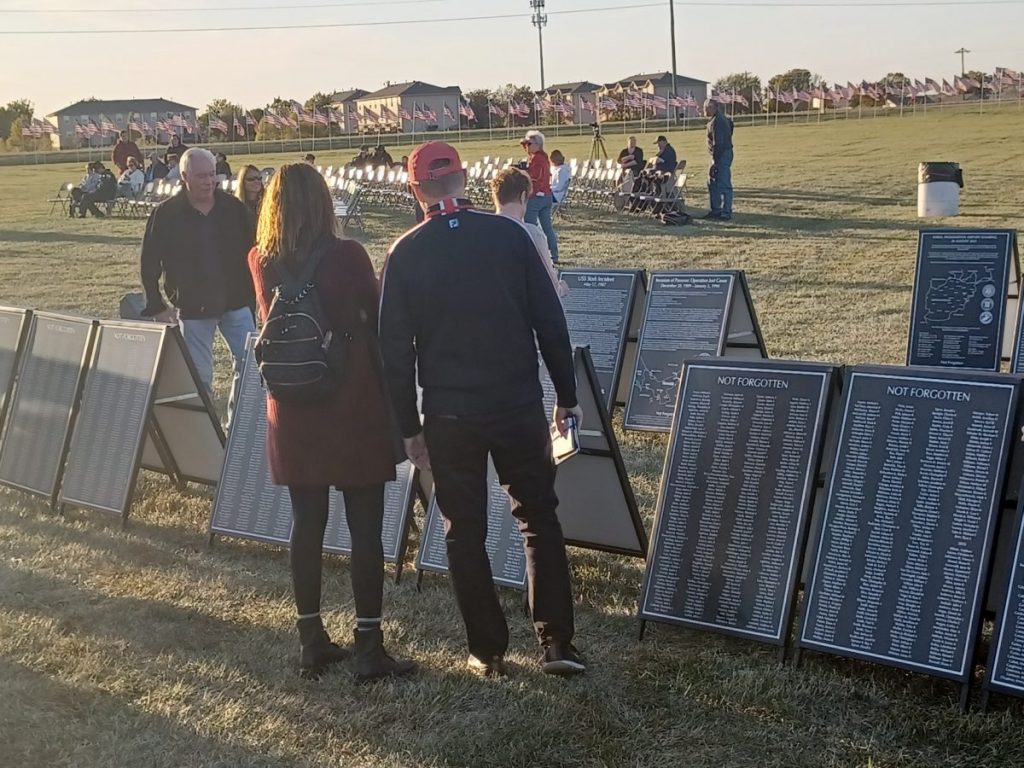 A Vietnam veteran and his loved one paying tribute to those who made the ultimate sacrifice.

Truck Centers Inc. welcomed the public on Thursday to the opening ceremony of the Traveling Tribute of the Vietnam Wall. The display remained open for the public to witness 24-hours a day, each of the four days that it stayed in Troy.

The Cost of Freedom Display was also out for people to admire. It included tributes to veterans of both World Wars, Korea, Operation Desert Storm, Iraq, and Afghanistan, as well as a memorial to victims of 9/11.

During the opening ceremony visitors came through to pay homage and honor those who made the ultimate sacrifice for the freedoms that are enjoyed by the citizens of this country. Truck Centers Vice Chairman and minority owner Mike Yates emceed the event and thanked every veteran in attendance.

“It’s an honor for us to host this significant memorial and allow many of our friends, relatives, guests, business partners, as well as others showing tribute to those who paid the ultimate price for our country, in Vietnam,” Yates said. “It is also my privilege to thank all of the veterans who served our country to keep Americans free.”

Yates also thanked all of the community members and guests in attendance, as well as the myriad support staff that made the event a success.

“We’d like to thank each and every one of you for being here this evening and welcoming the American Veterans Traveling Tribute, the Vietnam Memorial,” Yates said. “We would like to recognize the AVTT group who accompany the memorial when it travels, whether it be the veteran escorts or those who work to assist the visitors, these individuals dedicate themselves all year-round to making this event a memory for each and everyone of us.”

The traveling wall is an 80% scale replica of the Vietnam Memorial Wall, in Washington D.C., that displays the names of more than 58,000 American soldiers who sacrificed their lives in the name of freedom. The Vietnam Wall in Washington D.C. was dedicated on Veterans Day in 1982. It fulfilled the nation’s promise to never forget those who served and sacrificed during the Vietnam War from 1964 until it was declared over in 1975.

Several distinguished guests spoke at the opening ceremony, all of which were veterans and so from the Vietnam-era veterans.

David Nonn, mayor of Troy and veteran, spoke in a somber tone when describing his feelings for the people whose names are etched into the Memorial Wall, never to be forgotten.

“I would like to say a special thanks to you all, the Truck Centers family and the Yates family for putting this event on,” Nonn said. “I deeply appreciate the wall coming here. There are no words that I can say to express how I feel about the names on that wall. We truly appreciate the sacrifices of those names and those families.”

Also during the event, Vietnam-era veteran, Major General Thomas P. Kane, U.S. Air Force retired, thanked veterans for their service. He told stories of when he registered for the selective service, as well as of the history of the wall and the tremendous sacrifice that local Vietnam veterans from Troy and surrounding areas made in the name of freedom.

“I say good afternoon to everyone that is here, ladies and gentlemen, veterans, our families, all of the distinguished guests who took time out of this day to recognize those who made the ultimate sacrifice,” Kane said.

According to Kane, the wall allows those who served, as well as their loved ones and the nation as a whole, to remember, honor, respect, and heal.

“This wall honors the 2.7 million service men and women who answered the call to protect our freedoms and way of life,” Kane said. “In addition to the 58,000 names that you will see on the wall, over 153 were wounded in action, many of them here with us today and we say, “Thank you.’”

The last speaker of the evening was Chairman and majority owner of Truck Centers and Army veteran, M. John Hopkins. He has been growing his company since 1976, a company based on people, integrity, family and a belief in God, according to Hopkins and other personnel.

Hopkins expresses honor for those who made the ultimate sacrifice and at the same time, sympathy, because those same heroes were not welcomed with open arms when they returned home from the horror that was the Vietnam War.

“The last time that I visited the Vietnam Memorial Wall in Washington D.C. I was moved to tears by the incredible service and sacrifice by so many,” Hopkins said. “It’s just a real blessing and honor to host all of these people.”

Truck Centers has over 60 veterans on staff making up 10% of their work force and a lot of which volunteered to help set up and breakdown after the event was over.

“At TCI, we are proud to be American and have many dedicated veterans working within our company,” Hopkins said. “Our team has stepped up to handle a large portion of the volunteer efforts needed to make this event possible and, as a leader, it is a great source of pride. It is our privilege to host the tribute in Troy and allow the community to experience it.”

Truck Centers brought the wall to Troy as a prelude to Veterans Day and the 40th anniversary of the dedication of the memorial in Washington D.C. American flags surrounded the entire campus at Truck Centers and lined both sides of Formosa Road leading to the entrance of the building.

The event was actually a surprise to Hopkins from his daughter, President/COO of TCI, Katie Hopkins and she expressed her humbled appreciation of the event. She said the front three rows of flags that lined the front entrance of Truck Centers was for the Field of Forgotten Soldiers. The 140 flags placed there were a representation of veterans who take their own lives each week.

“We are humbled to respectfully welcome the American Veterans Traveling Tribute Vietnam Memorial Wall to Troy,” Hopkins said. “We appreciate the Flagman’s Mission and all of the volunteers who put out flags to prepare for the traveling wall’s arrival.”

“As a veteran-owned business, we feel honored to bring this to our community in appreciation of all those who served in Vietnam and all veterans of the USA,” she said.